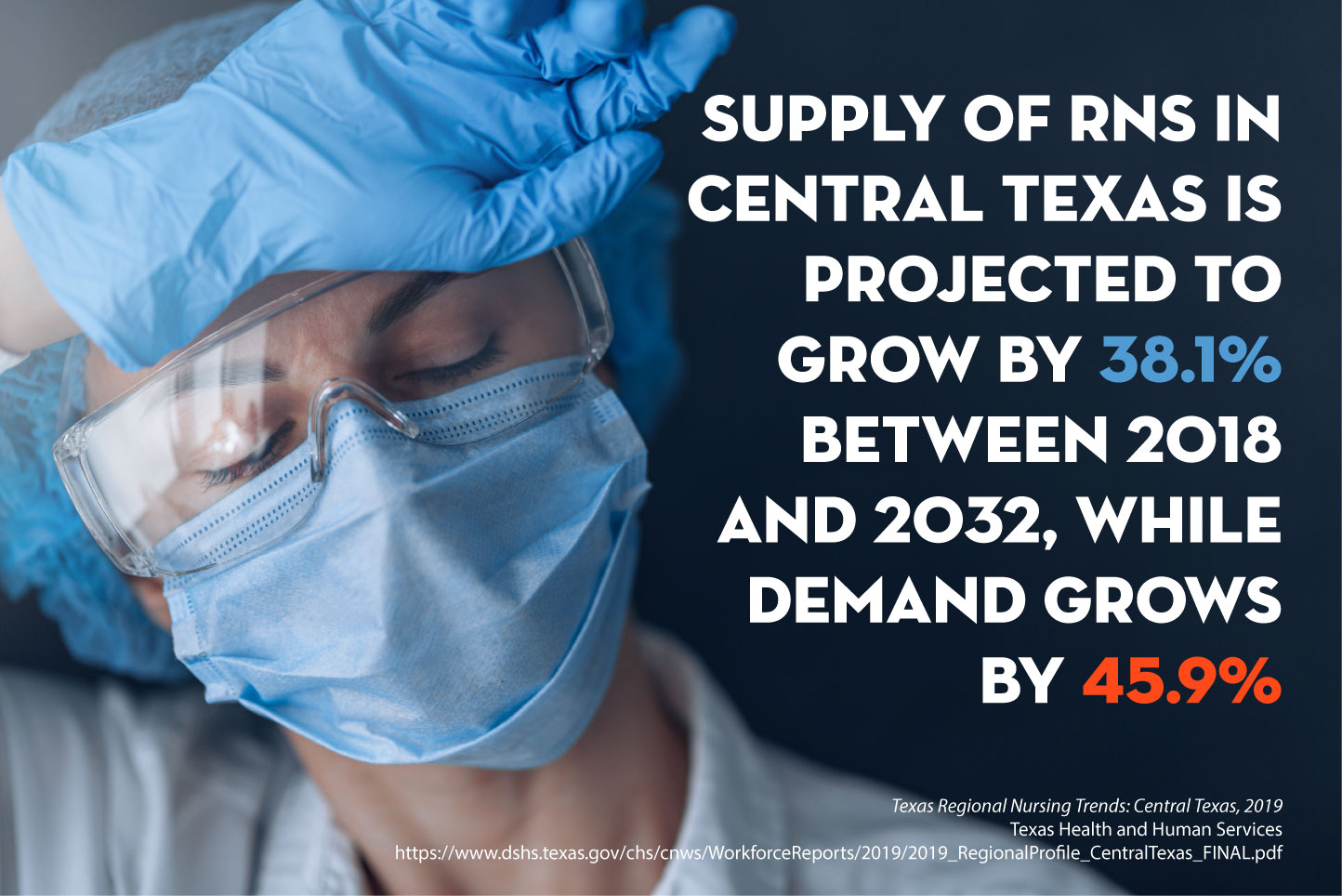 “There’s a real problem here. Why aren’t we solving it?” When she agreed to take on the project, research fellow Sherry Sybesma had no idea there was a problem at all. But after a year spent digging into the complex issues surrounding our region’s nursing shortage, she couldn’t help but sound frustrated. Our communities’ need for nurses has outpaced the supply for over a decade, and the gap keeps growing. She was baffled and disturbed at how such a critical public health issue had gone seemingly unaddressed for such a long time.

Sherry was connected to the nursing shortage research project through Leadership Austin’s Fellows program (LAFP). The LAFP is geared towards professional executives who are retired or mostly retired, who wish to contribute to the community by choosing to undertake a project designated by various non-profit organizations in the city. Sherry chose Capital IDEA’s ‘Associate Degree RNs and the Central Texas Nurse Shortage’ project because, “It looked interesting, and I had heard of Capital IDEA, and everything I heard was positive. Capital IDEA has an amazingly strong and positive image in the community.”

Sherry arrived at Capital IDEA in January of 2020 ready to hit the ground running. The project was originally to be a narrative of the impact of the Central Texas nurse shortage on the work of non-hospital healthcare employees. Sherry had to conduct numerous interviews with non-hospital healthcare professionals at every level, from front line nurses to executives. Utilizing her skills as a seasoned executive, she managed to schedule several interviews right off the bat. But within a few months, the scope of her project took an unexpected turn.

“There’s a real problem here. Why aren’t we solving it?”

What would eventually become the worst pandemic this country had ever seen would tremendously impact her project. “I remember the moment I knew I would have to pivot. I had set up an interview at a long-term care facility. When I arrived, I was hesitant to shake hands, but they assured me they had no cases, and they weren’t worried about shaking hands. Two days after the interview, the facility had to shut down due to a city-wide order.” Shortly after that, interviews Sherry had set up for the project started postponing, and with the COVID-19 pandemic threatening to shut down her project altogether, she realized she would have to move forward however she could.

What was initially meant to be a report filled with first-hand testimonials would eventually become a data-driven summary with as many supporting statements from healthcare professionals as she could get. “Long-term care people were hard to get a hold of. Trying to get an interview with a medical person was nearly impossible.” Hospitals and healthcare facilities were overwhelmed with their short-term needs, and understandably, a researcher looking into long-term needs wasn’t going to get the time of day.

Through her alternative research avenues, Sherry discovered that the ever-widening nursing shortage had been coming on for over a decade. Multiple agencies had documented it at the local, state, and federal levels and projections for the future looked just as bleak. According to the Texas Department of State Health Services, demand for nurses in Central Texas is projected to exceed supply into the next decade.[1] Between 2018 and 2032, Central Texas demand for registered nurses (RNs) is projected to grow by 45.8% and supply is projected to grow by 38.1%, for a gap of over 13,000 nurses.[2]

“It was overwhelming to see the nursing gap increasing year after year, and it was clear that we were entering a nursing shortage. And over that time, nursing schools have been turning away tens of thousands of qualified applicants.” According to Sherry’s research, nursing schools across the country rejected over 56,000 qualified applicants from undergraduate nursing programs in 2017. This problem didn’t make sense to her. “As a businessperson, I look at these two things and think, ok, we need more nurses, we have people who want to be nurses, these two things solve each other, why aren’t we doing this?”

Sherry highlighted two critical obstacles preventing schools from accepting and training more applicants: not enough space for clinicals and a shortage of nursing school faculty. From Sherry’s viewpoint, this is an issue of creativity and money. A creative solution is needed to find ways to provide real-life training experiences to nursing students. Sherry believes that “with the many creative ways in which medicine is implemented to solve health problems, why is it so hard to figure out how to get a new nurse more bedside experience?”

As for the shortage of nursing school faculty, Sherry believes this is an issue of money. She asks the question, “what can we do to make people want to go into teaching the nursing profession?” Her answer is to make their salaries competitive with hospital pay. “If they go into teaching, they are essentially taking a pay cut, so it doesn’t make sense to them.” While Sherry sees this as a simple solution and an easy first step to solving the problem, she admits that as an industry outsider and a former Senior Vice President of a successful international company, she doesn’t see this problem the same way someone from the inside would.

“It’s not a they problem; it’s an all of us problem that can’t continue to be ignored without serious consequences for our community.”

Nonetheless, she feels justified in being concerned. In addition to being a numbers problem, the ongoing nursing shortage is also taking a real toll on patient care and self-care for currently employed nurses. According to an RN that Sherry interviewed early on in her project, “the biggest issue for patient care is we’re not just tired, we’re exhausted. I don’t think my patients are getting the attention and care they would if we were fully staffed.” Without a full staff, nurses frequently have “a surge patient load that exceeds the standard staffing matrix.” And as the nursing shortage continues to grow, nurses are being asked to take on added responsibilities, which leads to morale issues and turnover. Sherry remembers speaking to a nurse who’d already reached her limit. “Once this pandemic is over, she is going to quit because it’s too much.” In Sherry’s opinion, nurses are the real heroes, and they are being overworked.

Sherry’s research in hand, Capital IDEA has renewed its commitment to moving this critical issue forward. Executive Director Steve Jackobs has elevated the nursing shortage to a strategic priority within the organization. “We must expand the infrastructures that train our essential healthcare workforce,” he says. “It’s not a they problem; it’s an all of us problem that can’t continue to be ignored without serious consequences for our community.” And moving forward, “we are taking every opportunity to support our healthcare partners, educators, and providers. We’ll fight by their side for the resources and attention this critical issue demands.”

If you know someone who is interested in becoming a nurse, please refer them to our program for assistance with tuition, textbooks, and childcare.