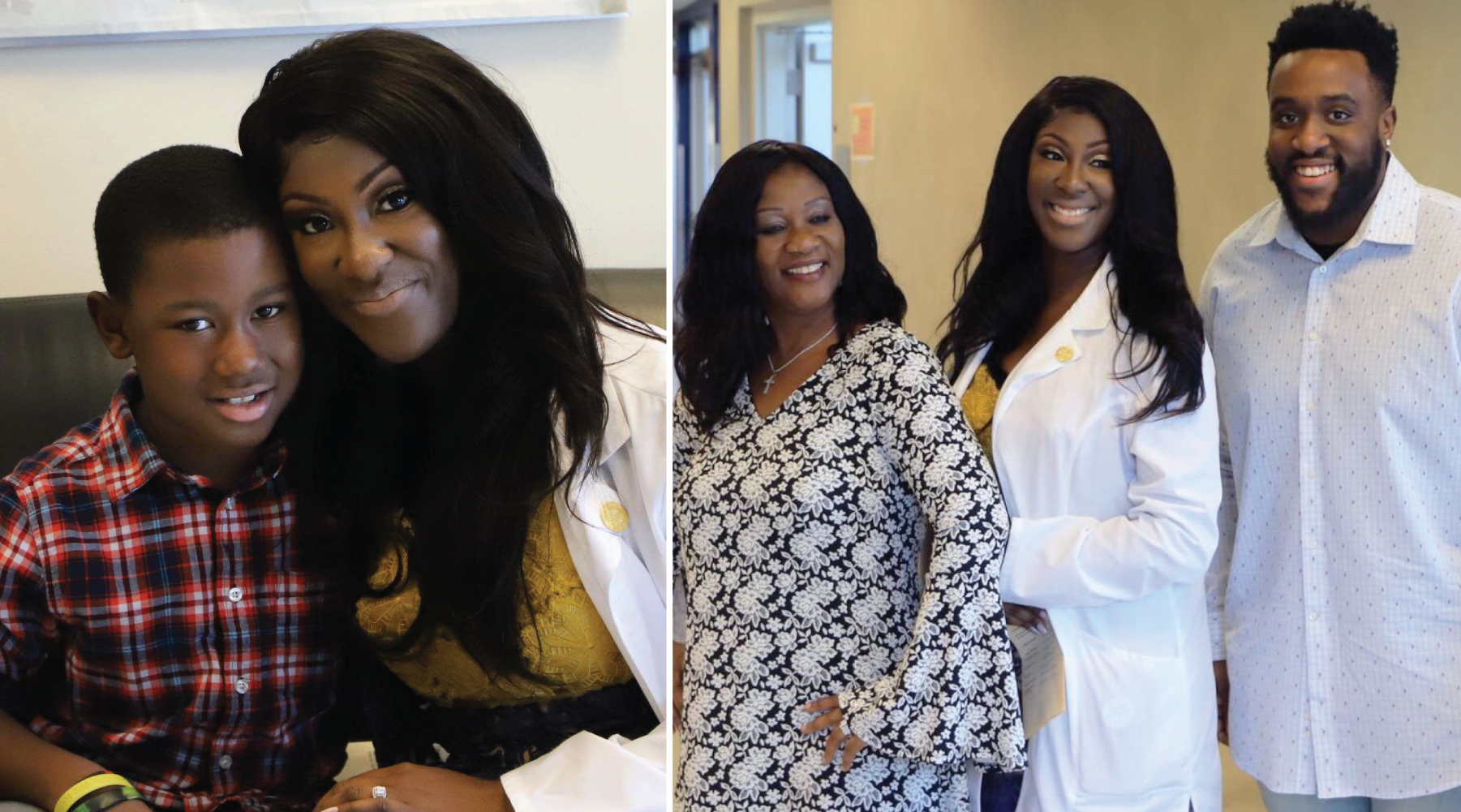 “Capital IDEA makes individuals stronger so that they can do the work that makes our community stronger.” – Stephanie Mbulu

From early on, Stephanie Mbulu had the heart to help others. “My mother would joke that I came out of the womb wanting to help people,” but it wasn’t until the second grade, when her mother was in a car accident, that her desire to help would become a calling. That experience, and the care her family received from the nurses, was imprinted on her heart, and “I knew then that God had instilled in me this desire to be a nurse,” but the road to get there took many twists and turns.

Right after high school, Stephanie enrolled in college with her sights set on nursing school. In her first semester, she started dating someone and found out she was pregnant shortly before the relationship turned sour. It escalated into a physically abusive relationship, and she realized she had to get out before it was too late. When she turned to her family, the bedrock of support she thought she could always rely on, they gave her an ultimatum.

“I’m Nigerian. I grew up in an African household with immigrant parents who came to this country to get an education and work hard for their family.” Stephanie’s family is steeped in cultural values. One of these values is a priority for women to get married. Having a child out of wedlock was considered hugely disrespectful to her mother and the family. She had a choice. Give up her child before he was born or lose the support of her family. She chose her child, a son she named Kamani, and mother and son were left alone to fend for themselves.

“My mother would joke that I came out of the womb wanting to help people.”

Stephanie left community college to earn her credentials as a Medical Assistant, which was as close to her dream of being a nurse as she could get under the circumstances. In her new job, she worked tirelessly to provide for her child, making the best of the unexpected twists her life had taken. Little did she know, an opportunity was about to present itself that would change her life.

“I was working at an OBGYN clinic when I met a nurse who was a Capital IDEA graduate. She knew I wanted to pursue nursing and told me to check out the program. To be honest, Capital IDEA sounded too good to be true, but after attending an information meeting, I realized that they were the real deal.” After going through the application process, Stephanie was accepted into the Career Expressway program. She now had the support system she needed to make her dreams come true. “When I got accepted, it was such a big sigh of relief. And now I believed I could do this. Now I believed I could go all the way and get my nursing degree.”

Even with Capital IDEA’s support, Stephanie knew it would take a lot of hard work and sacrifice to finish nursing school. Without family to rely on, Stephanie had to get creative with childcare. “For single moms, you have to come up with a plan. Without the help of my family, I relied a lot on my friends. One would say they could only watch him till 11:00 am, and another would say they could pick him up and watch them until 3:00 pm. So I would pick him up at 3:30 after clinicals. And each day of the week, I had to make a different plan, but I was determined to do this.”

“To be honest, Capital IDEA sounded too good to be true, but after attending an information meeting, I realized that they were the real deal.”

Little to no sleep became routine for Stephanie during this time. After putting her son to bed, she would stay up late to finish her studying and schoolwork. But all that sacrifice and hard work paid off when she graduated with her Associate’s Degree. She even managed to pass the NCLEX,  the notoriously difficult nurse licensing exam, on the first try! And shortly thereafter, “it was like a dream come true” when she was hired at Ascension Seton Medical Center Main as an Operating Room Circulating Nurse.

Graduation meant more for Stephanie than just a degree. It meant a better job and a better life for her and her son, who is now eleven years old. And it presented an opportunity for reconciliation with some of her family when they saw everything she had accomplished. Just as life was heading in the right direction, Stephanie’s faith and resolve were tested once again.

About a year into her new job, a pandemic swept across the globe, upending life in a way most people had never experienced. By March of 2020, COVID-19 had become so widespread in the United States it was shutting down businesses and overwhelming hospitals. “It was frightening, especially being a new nurse. It felt like the world was on my shoulders, a very trying time. I worked more hours and days than normal, and in a very short time, I got burned out.” Her front-line work meant she had to distance herself from her son. “Kamani has asthma. I didn’t get to see him except through FaceTime. Being away from your child for almost two months is not a very good feeling at all.” As testing improved and vaccines became available, Stephanie reunited with her son, still maintaining strict cleaning protocols. “I used the same type of wipes we use at work to wipe down everything! I wiped shoes, the car, the shower, everything! The entire year he managed to be safe, and all of that couldn’t have been done without God.”

“I worked hard to make my dreams come true, and I want to be a guide to others. I gave my brother the motivation to go to medical school, and I have set a different standard with my family.”

Through it all, helping others continued to be a hallmark of who Stephanie is, whether she’s serving as a nurse or a role model. “I worked hard to make my dreams come true, and I want to be a guide to others. I gave my brother the motivation to go to medical school, and I have set a different standard with my family.”

Today, Stephanie continues to love her career as a nurse, and despite the pandemic, she knows she’s in the right career. “This was a very trying time, but in retrospect, it has been very rewarding. We got to be there and help people feel better and reassure people who had to come in for essential surgeries that they would be safe and taken care of.” And even though conditions continue to improve, nurses are still feeling the strain. “It’s so vital that we get more nurses trained and out in the field. Currently, nurses are working overtime, switching shifts, floated to other units, and are getting burned out. We need help!” This help cannot arrive soon enough for nurses like Stephanie. “New nurses coming in are going to be nervous and scared, but we’re here to support them.”

TIP: You can graduate two years earlier if you don’t wait two years to start.

Capital IDEA is currently supporting hundreds of future nurses just like we supported Stephanie, and we have room for even more. From acceptance to graduation, we guide students through training and education in essential fields like healthcare, technology, and trades, so that they can fill a critical need in our community for caring and skilled professionals. If you’re ready for a new career and could make good use of a FREE education, we invite you to LEARN MORE »